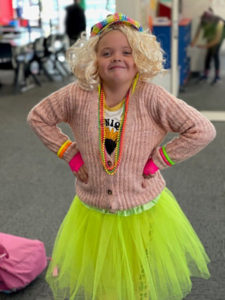 Our student leaders ran a special theme day on the last day of term 1. As part of their quest to raise funds to help others students were invited to pay a gold coin to come in 80s gear, with all the money raised being donated to Ronald McDonald House charities. The day was awash bright colours, big hair and lots of leg warmers. Well done student leaders. 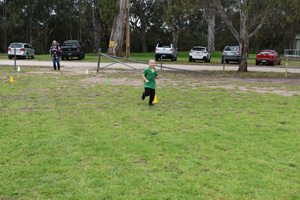 Our annual cross country was recently held at the Knob Reserve and saw our students compete for house points and the perpetual cross country trophy. The event was well supported by parents and family members who helped guide students around the tracks of the reserve. While many of our runners had their eye on a place and those who challenged themselves to improve their efforts of the past, were cheered and supported on the day.
In the end Arial House won this year’s trophy with 209 points, Antonio was second with 200 points and Touchstone was third with 179. Our Ariel House Captain, Hamish, accepted the trophy on behalf of his team and thanked all the helpers, participants and staff. A fantastic effort by all concerned. 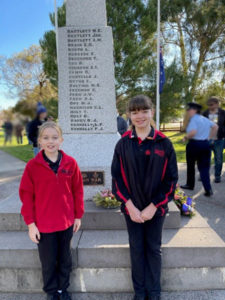 Despite the COVID regulations preventing many of our students participating this year we were proud to be represented by our school Captains, Emma and Piper, who laid a wreath on our behalf. We had quite a few other students attend with their families as well to show their respect for those who have been involved in conflicts and to the families who stayed behind. 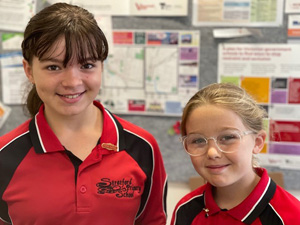 Our school captains have been busy making links with the Stratford Community. Over the past weeks they have been introducing themselves to local business owners and catching them up on all the great things our students have been doing.
Piper and Emma have a done a great job and represented themselves and our school to an exemplary level. So good, in fact, that the customers in one store gave them a clap! We are very proud of them for overcoming their nerves and challenging themselves in this way.
Thank you to the owners of the Ticklish Turtle and Wa De Lock who were our first meet-and-greet volunteers. We will be continuing to meet more of our local community over the coming weeks.
We are also grateful to these businesses for displaying some of the great art pieces that have been completed by students over the past term. Have look on the Wa De Lock Face Book page to see some of what is on display. 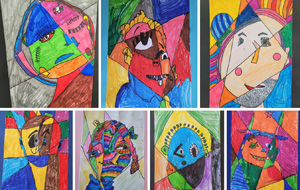 We have students who really work to improve and challenge themselves and this can be seen in fantastic art work that has been produced this year. During term 1 student focussed on portraits concluding with a Archibald Portrait style project for our senior students. Some thoughtful work was created as part of an ANZAC focus. If you haven’t already, call into Wa-De Lock and the Ticklish Turtle to see some of the work on display. 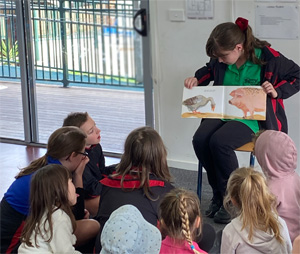 Years 5/6 students made a recent visit to the kinder and spent some time reading stories to the kinder kids. The students enjoyed spending time at the kinder and getting to know the younger children. Two visits took place and more will follow later in the year.